This information was written 4 years ago, not long after my son's untimely death.  It is still applicable today and more so.  I hope you will indulge me to repeat it.

Our son, Andrew, is never far from our thoughts and we do not really need an anniversary to remember him.   He is often brought to our minds when we see/hear/feel the political turmoil going on around us.  We adopted Andrew when he was 9 days old through private proceedings.  It was truly a miracle on many levels!  When we held him in our arms that first time, we were totally thankful to God and awestruck at being privileged to have that little child in our care.  Andrew’s birth mother was preparing to schedule an abortion when “God circumstances” intervened and saved his life.  Except for that intervention, by the time we held him in our arms he would already have been murdered by an abortionist.  Pretty dramatic difference, isn’t it?

Andrew’s presence in this world changed our lives and it was not always an easy road, to say the least.  But we never once thought it would have been better if he had been murdered instead of coming home with us.  Is it any wonder that I see red, deep anger, and grief when I hear the reasons put forth by political forces justifying unfettered access to abortion? Oftentimes the end game is to make it available for any reason at any time.  Contrary to vocalized altruistic justifications, it is usually about money, votes, and power.  Shannon and I will never vote for a presidential candidate whose platform vigorously supports abortion on demand.   Politicians say it provides a choice for the biological parent, but we know it also takes the choice away from the most vulnerable and helpless.  Who stands up for them?

You could scornfully call us one-issue voters if you like.  But we are not shallow by any definition.  We can share our opinions on any number of very important issues like limited government, the economy, jobs, law and order, real freedom, and capitalism vs socialism (we have lived in a socialist country by the way – have you?)   However, there is no issue that strikes to the heart of our character as a nation more than killing our unborn, helpless children!  We don’t care if all nations of the world are doing it.  Who wants to be like the rest of the world anyway?  We have been privileged to be in many different nations and let me tell you that, except for some isolated situations, we don’t want our goals to be just like the rest of the world!

So we will put our own interests aside.  We will hold our nose if necessary because of arrogant politicians and still vote.  We will refuse to be politically offended to the point of not voting, no matter how bad the offense.  We will certainly not waste our vote for a third-party candidate, just so we can proudly say we followed our principles.  Literally millions of unborn children are at stake in this election.  There are only two political parties that will decide the election.  Whether you like our choices or the system that produces them or not, your vote may decide who lives and who dies.  Is it not worth the effort to at least consider the gravity of the choice you, as a voter, will make? 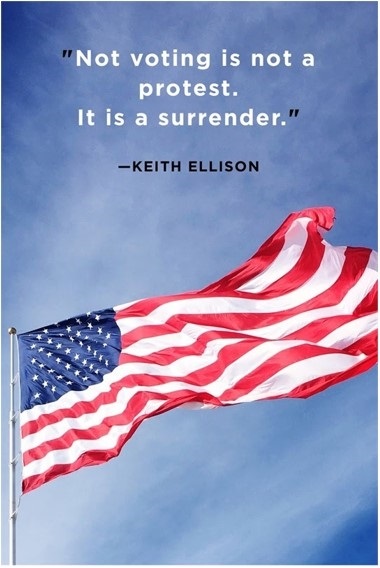