Recently we had the privilege to conduct an annual review with some clients and dear friends in Connecticut. On our return trip we took a detour to stop at Lexington, MA, where by most accounts the first battle for our national independence started. We were a day early for the annual reenactment that brings thousands to this small town park to remember this historic event. It is not necessarily easy to get back to the original thought processes of the people who lived, fought, and died there 237 years ago. But it is not hard to be inspired when you have the opportunity to re-trace the original battle lines of that day as conflict was erupting from Lexington to Concord, 7 miles away, and back again. The U.S. Park Service and many others have done a great job of preserving this portion of our national heritage, lest we forget! 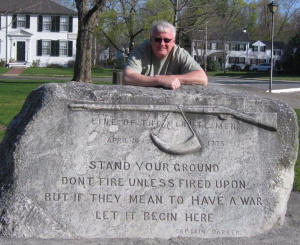 I am unashamedly a flag waver. I love our country and relish every opportunity to study its history. I also love the unvarnished truth, the stark reality of all the conflicts our nation has seen first-hand, and the actions & reactions of people before, during, and after each situation. And studying how people study history is often as interesting as the actual history itself!
I am also a person of faith. I’d like to think, after 42 years, that I have some level of maturity in my walk with the Lord. I don’t believe I look at the world with rose colored glasses, naïve to the point of being gullible. I know that Americans are not perfect and are not better than anybody else in the world, but when I stand on the shores of Normandy and view the beaches, where thousands of Americans joined with multitudes of other nationalities, putting their lives on the line so the European continent could be free, I am deeply touched.

There is something special about America. No doubt about it. It is called Freedom. The scripture says, “Do not use your freedom for an occasion to the flesh,” Galatians 5:13. I suspect we all have the challenge of living up to that standard, but that is the benchmark. One of those challenges is to be responsible in the land He has placed us. Civic responsibility is a call from God to do the right thing wherever we are. The freedom that’s been bought for us by the blood of those who have died brings the right and responsibility to participate in the political process. That means we need to become informed and vote in elections for who we think is the best candidate, regardless of religious faith. We also have the responsibility to pray for that individual. God is no respecter of persons, whatever their religious faith, but regularly uses those He chooses to accomplish His will.

Let’s stay engaged by being informed, plan to vote the best way we can, and honor God and our country.

“I tremble for my country when I reflect that God is just; that His justice cannot sleep forever.” – Thomas Jefferson, 1787 Notes on the State of Virginia

“Sure I wave the American flag. Do you know a better flag to wave?   Sure I love my country with all her faults. I’m not ashamed of that, never have been, never will be.” – John Wayne

WE WOULD LOVE TO HAVE A PHOTO

Thank you to those who have sent us photos.  If you haven’t, will you consider sending us a digital photo via email?   Please send it to KDunlap@nextfinancial.com   We won’t post it on Facebook or share it in any way.   It is just for us to know you better (and to enjoy your smiles!)

SEE YOU AT CHEO

Faith Investment Services will again be attending the CHEO convention (Christian Home Educators of Ohio) in Akron this June.   The convention, held June 21-23, is Ohio’s premier homeschooling event.   We are pleased to be offering a workshop on Financial Literacy, featuring PRACTICAL, FUN, & FREE resources for homeschool families to use in teaching their children about finances.   If you would like copies of the handouts  or more information about the workshop, please contact Kathi at KDunlap@nextfinancial.com.

IS THERE A PENDULUM?

I believe that a pendulum exists on which conscientious Christians swing in their stance toward political involvement.   One extreme of the pendulum is to have no involvement at all in the political process.   Clinical detachment or perhaps even cynicism motivate this choice.   The other   extreme is to idolize one’s own power in the political process.   Empowerment and affecting change are the paramount goals on this end.

Does the Bible address either extreme?   Is there a scriptural mandate to vote…or not vote?

The following verses shed some light on our responsibility to participate in the government voting process.  In Mark 12, Jesus directs the Pharisees to give to Caesar that which is Caesar’s.   While this is a direct reference to taxes, it could be noted that we have a civic obligation to vote as well as pay taxes.   “Every right implies a responsibility; every opportunity, an obligation; every possession, a duty”- John D. Rockefeller Jr.

Mark 12  13 Later they sent some of the Pharisees and Herodians to Jesus to catch him in his words. 14 They came to him and said, “Teacher, we know that you are a man of integrity. You aren’t swayed by others, because you pay no attention to who they are; but you teach the way of God in accordance with the truth. Is it right to pay the imperial tax to Caesar or not? 15 Should we pay or shouldn’t we?”  But Jesus knew their hypocrisy. “Why are you trying to trap me?” he asked. “Bring me a denarius and let me look at it.” 16 They brought the coin, and he asked them, “Whose image is this? And whose inscription?”  “Caesar’s,” they replied.  17 Then Jesus said to them, “Give back to Caesar what is Caesar’s and to God what is God’s.”  And they were amazed at him.

I believe that voting is a right and obligation of the US citizenry.   It is my strong opinion that to ‘not vote’ is unchristian.  However, I am concerned by those who worship their political party and their grassroots efforts above God himself.   Psalm 20:7  Some trust in chariots and some in horses, but we trust in the name of the LORD our God.

Isaiah 31:1Woe to those who go down to Egypt for help, who rely on horses, who trust in the multitude of their chariots and in the great strength of their horsemen, but do not look to the Holy One of Israel, or seek help from the LORD.

We are called in Luke 19:12-13 KJV to ‘occupy until He comes’.  12 He said therefore, A certain nobleman went into a far country to receive for himself a kingdom, and to return.  13 And he called his ten servants, and delivered them ten pounds, and said unto them, Occupy till I come.

Occupying is a matter of responsibility.   I believe it starts with getting your own financial house in order.   Failing in this area affects other people, just as failing on a national level is affecting our entire economy.

Occupying extends to the area of political participation.  Avail yourself of ‘unbiased’ news sources (nothing ever written is totally unbiased…the best you can hope for is an admitted bias which you are forced to think your way through!)  Think.  Discuss.  Vote.   Theodore Roosevelt said, “The first requisite of a good citizen in this republic of ours is that he shall be able and willing to pull his own weight.”

Occupying ultimately recognizes that the ‘pounds’ which the nobleman hands his servants belong to the nobleman (Luke 19).   Just as with our money, our political involvement and the energy and enthusiasm we apply to the process belong to God.   Our trust must be in Him and Him alone.   Anything beyond that is idolatry.

What’s your point?  Please, as Christians and good citizens, plan to vote this fall.   Learn where the candidates stand on various issues and see who most closely aligns with your values and with the Constitutional design for government.   Invest yourself in the process and, at the end of the day, trust in God.